EDIT: This is no longer available. 🙁

These free sports cards will make for a fantastic stocking stuffer if they get here in time for Christmas. Otherwise, I'm sure they'll make a good Happy Second Tuesday of January present or at the very least a great Happy Groundhog Day gift. What, y'all don't celebrate those holidays?

In case you're having trouble with this freebie, simply add it to your shopping cart and proceed to check out. It'll let you bypass the payment screen, so all you need is an address and e-mail.

Unfortunately, the second word in the title above only contains two n's, which means this is just a free water bottle from Canon. I think we all can agree it would have been much cooler if this was a “cannon water bottle.” I could go either way with it too: it could be a cannon that shoots water bottles or a water bottle in the shape of a cannon.

You know, the next President should make a new Cabinet position titled Secretary of Awesome Ideas and then give me a call. I wouldn't even mind being placed near the bottom of the line of succession!

Oh yeah, this freebie does require a nine question survey about the last time you contacted Canon's customer service department. I've owned so many different computers over the years that I'm sure I've contacted them at least once before.

Just last week I realized that a bunch of NBA and NHL teams gave away free tickets to preseason games in late September. It sure would have been nice to post links to those offers back then, but since I still haven't completed my time machine, I was content with marking my calendar for next year's offers and calling it a day.

Then I did a little digging and realized that two pro NBA teams and one NHL team are still giving away free tickets! Each offer requires you to print out the e-mail they send you and bring it with you in order to pick up the tickets, so don't forget that little detail. And as always, if you know of an offer I didn't find, share with us in the comment!

EDIT: This freebie is no longer available.

Ahh, golf. This free golf grip should come in handy the next time I hit the links and try to throw my clubs in the nearest body of water. At that point, it's all about getting the most distance and biggest splash possible. Nothing's better at recouping the self-confidence you lost on the previous hole than your buddies marveling at your golf club throwing skills.

Are there really only three days left of the Olympics? That might actually be beneficial for me. I'm pretty sure I qualify for federal assistance at this point, because I guarantee you that I'm addicted. If you haven't been watching it as religiously as I have though, you might not realize that many of the athletes stay in what's called the Olympic Village. And do you know what they have there? Freebies upon freebies upon glorious freebies.

So while you and I have zero access to them, I thought it might be cool to list the awesome freebies that some of the world's finest athletes are enjoying right now. 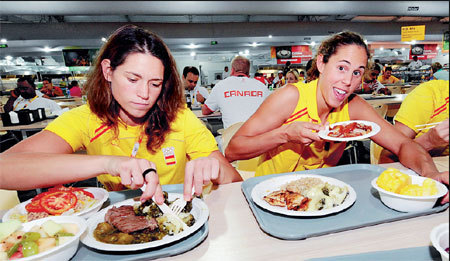 You'd think that elite athletes would eat nothing but healthy food during their training and for the most part, you'd be correct. However, since it takes a ton of work to make it to the Olympics, most athletes tend to take a break once they're finished competing and enjoy the finer aspects of dining. As Australian swimmer Melanie Schlanger put it, “There are vending machines everywhere, and the dining hall has McDonalds, as well as piles of Snickers bars and freezers full of ice creams.” If there's one thing I excel at, it's eating unlimited amounts of Snickers. In fact, they should make that an Olympic event just so I could go and win a few medals.

A quick side note: guess how many apples will be eaten in the cafeteria? An estimated one million. Or to put it another way, they'll eat about 936,000 bananas, which is enough to circle the Olympic marathon route more than three times.

END_OF_DOCUMENT_TOKEN_TO_BE_REPLACED

These free bio golf tees are basically just like normal golf tees with the added bonus that they're good for the environment. When they break and get left behind on the course, they'll eventually break down and not release any toxins into the environment.

I'm not sure when I'll ever use these, but I can always stick them in my dad's bag. I don't golf that much, I just like driving the cart around and drinking beer with my buddies while screaming “FORE!!” If there was some way to score that, I'd make the equivalent of a hole-in-one every time and be just as famous as Tiger Woods.

When I say I take precautionary measures regarding my health, I'm not kidding. If I get a paper cut, I put my entire hand in a cast to avoid any future cuts. In fact, I'm in a full body cast right now because I found a bruise on my thigh and I have no idea how it got there. Maybe I'm going a little overboard, who knows. Something like this free ACTIV-FLEX cohesive tape might be more along the lines of what I need.

Just a bit outside!

It's tough being a huge baseball fan of a team you don't live near. I'm stuck listening or watching the nearby Orioles or Nationals, which sucks unless the Mariners are playing them 🙂 However, mlb.tv has an awesome (but kind of pricey) service where you can watch or listen to any game nationwide via your computer. And from now until July 14th, they are letting your listen to any baseball game for free. It's pretty cool, you even get to pick which broadcast you want to listen in on, so if your team is playing an away game, you still can tune into your team's broadcast and listen to some heavily biased play-by-play!

EDIT: This is now dead.

If you're anything like me, you're scared to death of opening that cabinet in the kitchen right above the microwave because you know the second you do, you'll be buried in 900 free water bottles. They'll come tumbling since you've stuffed way too many in there and then you'll never be able to cram them all back in and meanwhile, you're busy trying to pick which one you want to take to the park with you and finally you become too flustered and just plop back down in front of the computer to see what you can find on YouTube. What, I'm the only one who does this?

I'm not sure what this free CLIF BAR training kit is actually training you for, but I'm always down for some miscellaneous exercise. Wait, did I say exercise? I meant to say lying in bed while surfing for freebies with my laptop, drinking a beer, and watching The Discovery Chanel. Luckily for me, I don't need a freebie to do all that! Though I would like a free beer…

My grandma used to live right next to a driving range, which would have been the perfect place to use these free golf tees. Unfortunately, I'm banned from ever returning there since as a kid (ie, moronic high schooler with too much time on my hands), I used to wait until dusk, sneak down a few yards, strap on a football helmet, and then proceed to race around the range while waving my arms in the air and daring anybody to hit me. Somehow I never got beaned on the head and a few of my friends actually started joining me whenever Friday night was proving too dull for us, but that fun ended when the owner finally let his snarling Dobermans off their leashes. I tell ya, if you've never seen a pack of skinny white boys running for their lives while wearing oversized fishbowls on their heads, you missed your chance that night.

You know, now I think I understand why every time I play golf with my buddies, I end up in last place four holes into the course, get drunk, and wreck the golf cart while trying to joust with giant oak trees.

I don't know much about minor league hockey, but I do know how amazing minor league baseball is. When I was a young tot, my town used to have a minor league team called the Spartanburg Phillies, but they bolted town in 1994 and ever since then it's been a fighting battle to try and restore one of the oldest baseball parks still standing in the country. The only good part about the Phillies leaving when they did was that since they were gone, the local high schools got to play in the stadium. And let me tell you, some of my fondest baseball memories are of roaming over that massive outfield in patrol of the ever illusive flyball. Such good times! So go get your free AHL hockey tickets and support your local teams, whatever the sport may be!