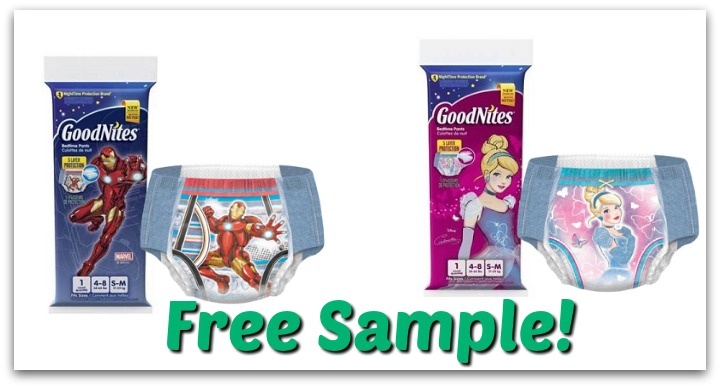 Hey look! A new free Goodnites Nighttime Underwear offer for boys is available. As of 2022, the form for girls underwear samples seems to be down.

Samples this time around are of sizes L and XL. They also come with a free sizing kit. All you have to do is click through to the site, select the gendered samples you want, then fill out the address form.

You think the kids promo images are always smiling because they just learned they can pee in bed?

This list of free baby stuff is the most up-to-date guide on all the baby freebies you can get! I list active free diaper samples there first.

Back in the day, Huggies, Goodnites, and Pampers gave away a bunch of free baby diapers. Now, they're a bit more rare. Below you'll find a collection of many of our old free diaper jokes from many moons ago 🙂

Chances are if you have a little one, you've already got a few diapers on hand. But you can never have too many. Trust. Me. On. That. We won't get into the specifics, but let's just say the end of this little episode involved myself, my little brother, a beach towel, and a bunch of paperclips. Oh, what I would have done for some of these free pampers diapers back then!

Sam's Club members can get free Pampers Dry Max diapers which are 2x dryer and 20% thinner! WHOA! That's … amazing? I don't really know how to ever take those types of statements. Those figures always look like they're fake and dang it, making facts up is my job!

Here are some free Pampers UnderJams featuring NightLock! I like that name. It makes me imagine a pair of diapers with an actual lock on them. You could even take it one step further and tell kids that it locks them to the bed so they can't escape closet monsters or boogie men. I'm gonna make an awesome uncle / horrible father.

Some people may think these free GoodNites Boxers are only useful if you have a child, but that couldn't be any further from the truth. I plan on fashioning my sample into some sort of shield for the next water gun battle I become engaged in. In fact, I find you can never be too prepared for such a battle, especially during the summer months. I refuse to leave my house without my main gun, a few single shot guns hidden strategically around my body, and a cooler full of water balloons.

And to think, my tenth grade math teacher said I'd never make much of myself. How does that crow taste, Mr. Jones?!

The free GoodNites underwear offer from Walmart is back just in time for school! I still vividly remember my first day. Nervously hiding behind Mom's legs, pleading with her not to leave me, and wearing my big boy diapers for the first time. I tell ya, high school was a crazy experience!

Next were these free Huggies Supreme Wipes. I like to imagine these were originally developed for Supreme Court Judges, kind of like the only reason we have Tang is thanks to astronauts.

I feel like there are some redundant words in the title of these free Huggies Snug & Dry diapers from Target. Shouldn't all diapers be snug and dry by default? Who's out there buying loose and soaking diapers?

These free Huggies snug & dry diapers from Costco don't require a member ID. It doesn't even require that you have a baby, which is good for me. The previous time I thought having a kid was a requirement resulted in the oddest introduction I've ever had with a neighbor. It seems people don't take kindly to strangers asking “hey, can I borrow your kid?”

Sam's Club's head of marketing is ticked off again! She's demanding a member ID for these free Pampers Dry max diapers, so I take it she had another rough morning. Perhaps another pet was introduced to the electric razor or maybe while in the shower, her bed became the scene of a new Jackson Pollock painting.

You know, her imaginary kids sound pretty wild. I think they need a night or two of Babysitter Goob to whip them into shape. I'm like Mary Poppins, but instead of singing and dancing, I use pranks and scary voices to inflict terror. Which means I'm actually nothing like Mary Poppins at all.

Whenever I have children, I'm going to make sure to change their diapers outside under a tree just like on the packaging of these free Huggies Natural Diapers. The babies look so happy and most importantly, they don't appear to be releasing any bodily fluids onto their oldest brother as he changes them! Changing my siblings was like playing the world's worst game of tag.

I've always used free Parent's Choice baby wipes so that I'm reminded not to let the child decide. Trust me, handing the choice over to a baby is a decision that will haunt you for the rest of your days.

Still need a few free GoodNites underwear samples? Then sign up and thank me later when you are saved from doing a load of laundry at 5am. I accept Visa, Mastercard, and pallets of alcohol.

I know these free GoodNites Sleep Pants are for kids who have just finished their potty training, but I think there are other people out there who could benefit from them. For instance, how about people who are just lazy? Or crazy astronauts who need to drive across the country in a blind rage? Or 24-year old freebie hunters who don't like taking bathroom breaks because he's too busy trying to find cool freebies?!

Wait a minute, scratch that last one. I don't want any of you thinking I'm so chained to my computer, that I'm wearing a diaper right now. Because I so am. No, not! I'm not. Crap, my secret is now out…

As the name of today's freebie implies, these free GoodNites child pants are intended as sleep underwear for young children who might accidentally wet the bed. They're not intended to sit on your shelf for years before you drink a bottle of wine, use them as part of a costume for your dogs, then send hilarious Snapchats to your friends and family.

I mean, you can totally do that, they're just not intended for it.