I've joked on HIF and Twitter that my family is addicted to Shark Tank. It's the perfect show to throw on in the background while wrapping presents or drinking on vacation. But I never in a million years imagined it would have me interested in a Squatty Potty deal! 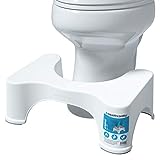 I bring it up because that's where I first saw the Squatty Potty. It was a rare product where I was 100% wrong from the getgo. I thought it was a stupid idea, then all the sharks were interested. I thought they wouldn't have any sales, at which point they announced they'd already broken $1 million in sales. I finally predicted I'd never again hear of Squatty Potty, which was strike three!

Flash forward a year later and a close relative of mine had trouble using the bathroom. They'd tried every home remedy and half the pharmaceutical ones, all to no avail. Just as they were about to give up, their spouse got a Squatty Potty as a gag gift. I'll spare you the rest of the details, but let's just say I started hearing about the Squatty Potty all over again.

You could say I was skeptical, but then I read the mountains of glowing reviews. Even the scant scientific data backed it up: “There is indeed scientific evidence that squatting results is faster and more complete defecation.”

It feels weird to say that when I later visited their home, I was stupidly excited to use the bathroom. I wanted to see if the Squatty Potty could live up to the hype now here we are.

Look, I don't know how or why the Squatty Potty became “unicorn improved,” as promised in the banner image above. However, I can attest to it providing the best poop of your life. So much so that I bought one for myself just now since they're on sale for $17.92.

Fingers crossed I'm not the only Hiffer who's become a Squatty lover, but if so, this is a great price for some comfort and relief!