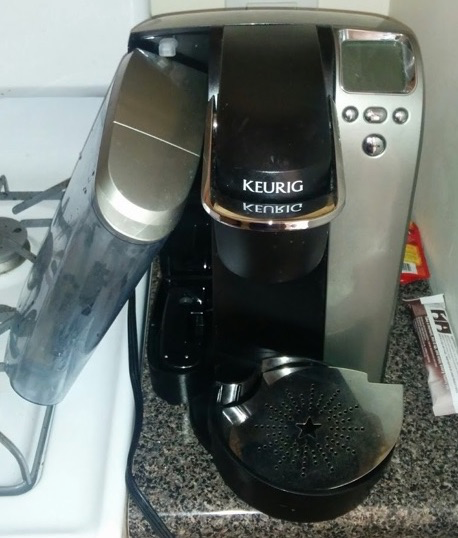 Never again with a freaking @Keurig. I’m not wasting hundreds of dollars on a machine with a shorter lifespan than a 1-term President.

It'd be one thing if @Keurig offered guides for DIY people to at least TRY and fix it. But no. Instead they ask you to call an 800 number…

…and then tell you there's nothing they can do after 60 seconds. THEN HERE COMES THE @Keurig UPSELL! WOW, 20 WHOLE PERCENT OFF A NEW ONE?!

When I called, they literally had me open / close the @keurig, then turn it on / off, then say there was nothing they could do.

I don't normally use HIF as a vehicle to complain. But when you take away my coffee and throw in a hearty dose of Crappy Customer Service, what you get is an exacerbated Goob who no longer gives a f*&k.

I'm a fairly smart guy. I'm a tinkerer. When something breaks, I'll at least spend a few hours trying to figure out why and fix it myself.

I also take good care of my stuff. Take my Keurig B70 coffee maker. I used distilled water to keep the pipes clean. The instructions said to Descale it by running vinegar through the machine every few months, which I always remembered to do. So you can imagine my surprise when my B70, which was purchased in July 2012, suddenly crapped out on me this month by saying NOT READY despite being powered on and full of water.

After running through all the troubleshooting steps, I turned to Google and YouTube. I learned how to put the Keurig in maintenance mode, which confirmed that the pumps were still working fine by sputtering out some cold water. Next I removed the Keurig's bottom plate to check for leaks, rust, or any water damage but found nothing wrong. I wanted to look further inside the Keurig, but every YouTube video I found practically explained that you have to break a part of the back case to get it off! What brilliant engineering!

It was around then that I realized I wasn't hearing the soft humming noise of the heating coil unit whenever I powered on the Keurig. A little more Googling revealed that there was no real easy fix for this and that I should probably just call Keurig to see what they said.

And that's when things got fun.

After reaching a Keurig customer service rep and giving her my serial number, she spent a grand total of 90 seconds trying to help me. Her first solution was to open and close the Keurig's top arm.

Then she asked if I'd poked a paper clip into the k-cup needles to clear any clogs. Sadly, I'd already tried this trick to no avail, but you know things aren't off to a roaring success when jabbing a $150 machine with a paper clip makes it into your Top 3 Solutions.

Her final attempt was for me to turn the machine on and off.

Shockingly, none of these solutions did a thing for me. Thankfully she had a final idea, which was to upsell me by offering a 20% discount on a new Keurig 2.0 machine for the low, low cost of $149.

At this point I should mention Keurig 2.0 coffee makers famously tried to DRM coffee! That's that Nerd Talk they tried to restrict which coffee you could and couldn't brew in a Keurig 2.0 maker!

The 2.0 … less-publicized feature has been getting most of the attention: the brewer’s advanced scanning system that locks out any coffee pods not bearing a special mark. It’s essentially a digital rights management system, but for coffee, and it’s proving to be the brewer’s downfall.

I can understand why an Xbox would have this technology to prevent kids from using Playstation games on it. But a coffee maker?! Sorry Keurig, but I'm not spending $150 on a machine that'll only brew the coffee you choose and will before the next Olympics when I can pick up a $12 Black & Decker drip machine on Amazon. (Imagine if Black & Decker tried to tell you which screws you could or couldn't use with their power drills. That's literally what Keurig tried and failed to do with their DRM 2.0 machines……..)

Look, I know electronics and consumer goods fail. It's the nature of Stuff. But I don't think it's insane to expect a $100+ device to last at least as long as a World Cup title. My monitor cost ~$150 5 years ago and it's still kicking just fine. If it was to break, I could either attempt to fix it or buy a similarly priced new one with far better specs, bells, and features. The same can be said for my window a/c, vacuum, microwave, bedroom TV and that's all just off the top of my head.

But in Keurig's case, they 1) make it incredibly hard for DIY people like me to attempt a fix along with 2) trying to upsell me a new $150 unit with weird DRM licenses and no other upgrades after just a few minutes of support. As a consumer, I find that a bit asinine.

K-cup technology is great and all, but Keurig's idea of support is a freaking joke. And that's why I'll never purchase a Keurig coffee maker again.