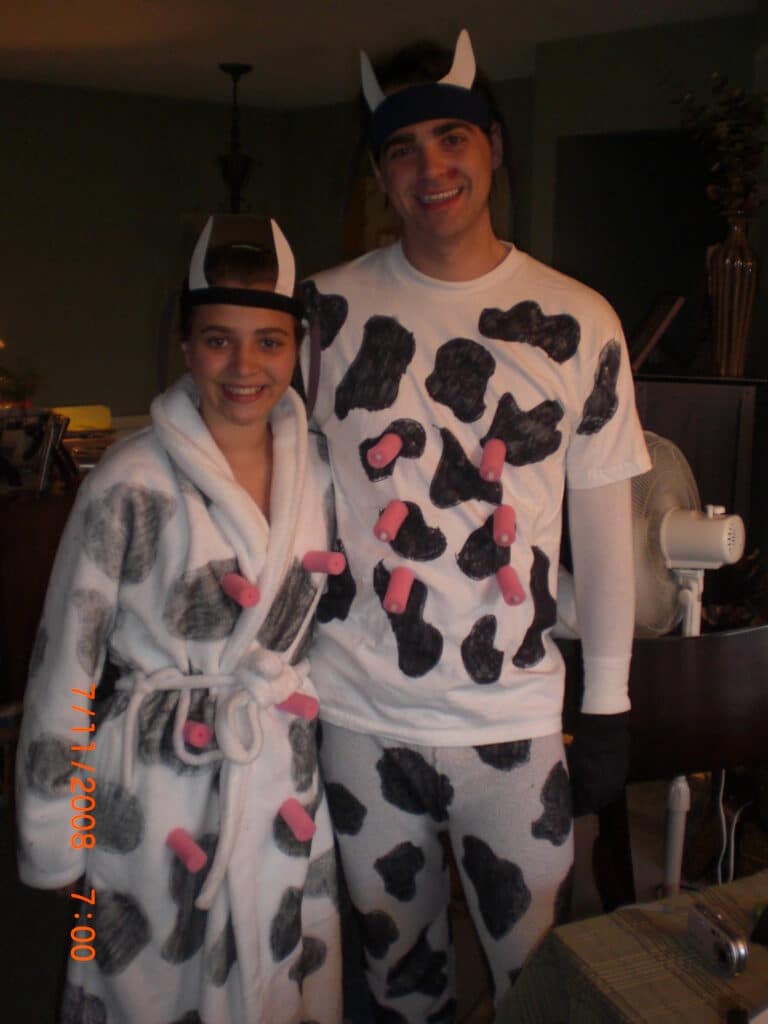 I woke up last Friday already knowing about the free Slurpee's at 7-11, but it wasn't until around noon that I logged onto HIF and noticed the Dress Like A Cow Chick-Fil-A freebie. I didn't have anything planned for the day, my little sister was pretty bored, so a few hours later…

Haha, it was actually pretty fun making the costumes. We scrounged up some old clothes we were going to give away, drew and colored in the spots, and then fiddled around with some ears / horns. My mom mentioned we should glue on some udders, which was a great idea, but a word of caution: super glue eats right through cotton and burn the heck of your chest 🙂

We rocked up to the joint half mooing and half laughing. Most of the workers in the back came out to see us and we found out later that we had by far dressed up more than anybody else that day. While eating, one lady drove through the drive-thru and died laughing when she saw us. She ended up circling around to take a photo of us with her cameraphone!

We both got our full combo meal for free and just in case you're wondering, I went with the chicken wrap and it was freaking awesome. We stayed there for about 15 minutes to eat and during that time, at least six or seven more people came in for some free food. Most just had on a white t-shirt with spots, but that was enough to get them a free chicken sandwich, which isn't bad!

Afterwords, we drove by the local mall since there's another Chick-Fil-A inside, but sadly it was already closed. After that little letdown, we swung by 7-11 for our free “dessert” Slurpee and had to explain more than once why we were dressed like cows. A chicken farmer stopped us when he saw our “Eat Mor Chikin” signs but he didn't quite understand the whole concept of freebies or HIF.

I saved my outfit and already plan on adding a few things to it for next year: a full mask, a tail, some fake grass to chew, and a cowbell! We took a ton of photos, but unfortunately most of them were blurry. Anybody interested in seeing the good ones thought can check out the HIF flickr page I just set up.

So hooray for a day full of freebies, goofiness, and a little creativity! Did anybody else participate in this? Share your story in the comments!

7 comments on “Freebie Review – Dress Like A Cow Day!”